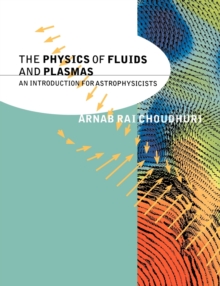 The Physics of Fluids and Plasmas : An Introduction for Astrophysicists Paperback / softback

A good working knowledge of fluid mechanics and plasma physics is essential for the modern astrophysicist.

This graduate textbook provides a clear, pedagogical introduction to these core subjects.

This book is unique because it presents neutral fluids and plasmas in a unified scheme, clearly indicating both their similarities and their differences.

Also, both the macroscopic (continuum) and microscopic (particle) theories are developed, establishing the connections between them.

Throughout, key examples from astrophysics are used, though no previous knowledge of astronomy is assumed.

Exercises are included at the end of chapters to test the reader's understanding.

This textbook is aimed primarily at astrophysics graduate students.

It will also be of interest to advanced students in physics and applied mathematics seeking a unified view of fluid mechanics and plasma physics, encompassing both the microscopic and macroscopic theories.