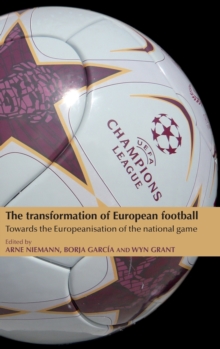 The Transformation of European Football : Towards the Europeanisation of the National Game Hardback

The book examines the transformation of European football in recent years by focusing on the impact of Europe in general and the EU in particular on the way that the game has evolved in a broad cross section of European states. The book brings together two significant research agendas: first, that on the governance of sport in Europe/the European Union; secondly, that within European integration studies on 'Europeanisation' (most commonly understood at the process of change in the domestic arena resulting from European integration).

Other transformational factors such as globalization are also assessed. The three chapters in the introductory section set the context within which the transformation of European football has occurred with particular emphasis on the role of UEFA and EU institutions.

The ten country studies in the central part of the book include the five leading football nations in Europe and smaller countries that are facing new challenges in the competitive environment of modern European football.

They include an example of a country that is a recent accession state and one outside the EU.

What emerges from these chapters is both the shaping influence of Europeanisation but also the extent to which it is countered and modified by national culture and structures.

What is also noticeable the sense of decline amongst some of the small and even larger footballing nations in the continent. This book will be of interest to students of European politics, sports governance and football, it also represents a substantial contribution to the debate on Europeanisation. -- .