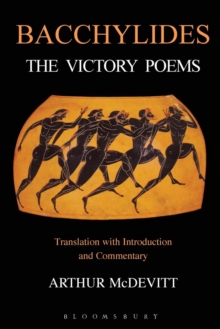 The victory poems of the Greek lyric poet Bacchylides are here presented in a fresh new translation, together with an introduction and commentary.

The translation captures the tone of the original, combining the joy of the occasion with the ever-present serious moral undertones, while the introduction sets the poems in their social and religious context, detailing the connection between competition and religious festival.The introduction also discusses the rise of the victory poem as a genre, and the way in which the poems were used by both client and poet as an avenue to immortality.

The commentary on the translation, designed primarily for non-language students, is full and detailed; it provides extensive background and explanatory information to enable students to appreciate the poems more fully, while broader issues are also discussed, such as the integration of the mythic narratives and their relevance to the poet's purposes, as well as the structural, thematic and poetic qualities of the poems.

This new commentary will allow the poems of Bacchylides to be more widely read, enjoyed and appreciated, as they deserve.