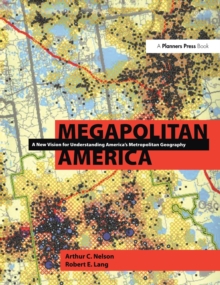 With an expected population of 400 million by 2040, America is morphing into an economic system composed of twenty-three 'megapolitan' areas that will dominate the nation's economy by midcentury.

The rise of 'megapolitan' areas will change how America plans.

For instance, in an area comparable in size to France and the low countries of the Netherlands and Belgium - considered among the world's most densely settled - America's 'megapolitan' areas are already home to more than two and a half times as many people.

Indeed, with only eighteen percent of the contiguous forty-eight states' land base, America's megapolitan areas are more densely settled than Europe as a whole or the United Kingdom.

Megapolitan America goes into spectacular demographic, economic, and social detail in mapping the dramatic - and surprisingly optimistic - shifts ahead.

It will be required reading for those interested in America's future.