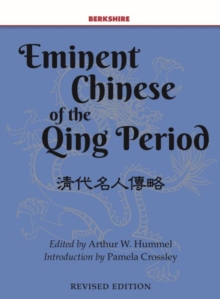 Eminent Chinese of the Qing Period (1644-1911/2) is a standard reference used by scholars, meticulously compiled and unique in its scope.

This much-loved work was produced under the auspices of the US Library of Congress and published by the United States Government Printing Office during World War II.

The 2018 Berkshire edition contains the original text of 800 biographical sketches as well as a preface by Hu Shih, a scholar who had been China's ambassador to the United States, together with new material for 21st-century readers.