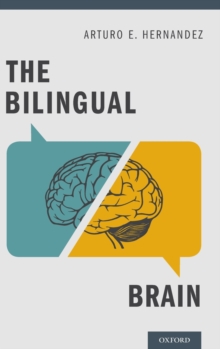 Cases of language loss and recovery bring up an intriguing paradox.

If two languages are stored in the brain, how can it be that a person can lose one of them, but not the other, and then gain one back without relearning it?

The traditional models of how a language is represented in the brain suggest that languages can become inaccessible, even though they are not entirely lost. As the author demonstrates through fascinating cases, stress-whether due to foreignlanguage immersion, sleep deprivation, or brain damage-can lead to the apparent loss of one language, but not the other.

Arturo Hernandez presents the results of 25 years of research into the factors that might help us to understand how two (or more) languages are stored in one brain.

It is clear thatthe brain is not egalitarian-some languages are privileged and others are not, but why?

Hernandez will extend recent work that has begun to take a biological or natural systems approach.

He proposes that, in bilinguals, two languages live inside a brain almost like two species live in an ecosystem.

For the most part they peacefully co-exist and often share resources.

But they also compete for resources, particularly when under stress.

Although there are still many questions to answer and many puzzles to solve, Hernandez argues that the nonlinear dynamical models, which have beenused to uncover the underlying mechanisms seen in natural systems and more recently in language and cognition, can be used to shed considerable light on the neural bases of bilingualism.