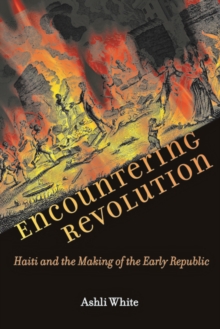 Encountering Revolution : Haiti and the Making of the Early Republic Hardback

by Ashli (University of Miami and 6290 SW 49th Street) White

Encountering Revolution looks afresh at the profound impact of the Haitian Revolution on the early United States.

The first book on the subject in more than two decades, it redefines our understanding of the relationship between republicanism and slavery at a foundational moment in American history.

For postrevolutionary Americans, the Haitian uprising laid bare the contradiction between democratic principles and the practice of slavery.

For thirteen years, between 1791 and 1804, slaves and free people of color in Saint-Domingue battled for equal rights in the manner of the French Revolution.

As white and mixed-race refugees escaped to the safety of U.S. cities, Americans were forced to confront the paradox of being a slaveholding republic, recognizing their own possible destiny in the predicament of the Haitian slaveholders.

Historian Ashli White examines the ways Americans-black and white, northern and southern, Federalist and Democratic Republican, pro- and antislavery-pondered the implications of the Haitian Revolution.

Encountering Revolution convincingly situates the formation of the United States in a broader Atlantic context. It shows how the very presence of Saint-Dominguan refugees stirred in Americans as many questions about themselves as about the future of slaveholding, stimulating some of the earliest debates about nationalism in the early republic.