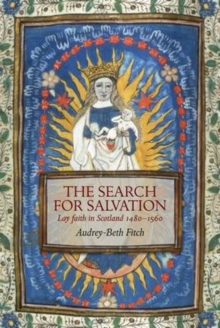 The Search for Salvation : Lay Faith in Scotland 1480-1560 Hardback

"The Search for Salvation" is an innovative and interdisciplinary study of lay faith in Scotland in the later Milddle Ages, examining both the religious ideas and practices of the people, and the ways in which these were shaped by images in literature, art, and church writings.

Contrary to traditional views, which portray the late medieval Scottish church as weak and corrupt, the book argues for the vitality and flourishing of lay piety in the later fifteenth and first half of the sixteenth century.

It thus sheds new light on the coming of the Protestant Reformation, as well as revealing the richness of the world of medieval Scottish religious imagery.

Each chapter examines one aspect of faith and the lay responses to it.

The first part of the book discusses three central concepts in people's understanding of death and salvation - the Day of Judgement, Heaven and Hell, and Purgatory.

The second part looks at the way in which people perceived of and related to three central figures of Christianity: God, Mary and Jesus. In examining such a wide variety of beliefs, the book goes beyond the study of religion to provide an understanding of the nature and functioning of medieval society as a whole.