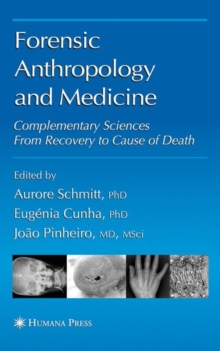 Forensic Anthropology and Medicine : Complementary Sciences from Recovery to Cause of Death Hardback

This science has become particularly useful to forensic pathologists because it aids in solving various puzzles, such as id- tifying victims and documenting crimes.

On topics such as mass disasters and crimes against humanity, teamwork between forensic pathologists and for- sic anthropologists has significantly increased over the few last years.

This relationship has also improved the study of routine cases in local medicolegal institutes.

When human remains are badly decomposed, partially skelet- ized, and/or burned, it is particularly useful for the forensic pathologist to be assisted by a forensic anthropologist.

It is not a one-way situation: when the forensic anthropologist deals with skeletonized bodies that have some kind of soft tissue, the advice of a forensic pathologist would be welcome.

Most of the background on skeletal biology was gathered on the basis of sk- etal remains from past populations.

Physical anthropologists then developed an indisputable "know-how"; nevertheless, one must keep in mind that looking for a missing person or checking an assumed identity is quite a different matter.

Pieces of information needed by forensic anthropologists require a higher level of reliability and accuracy than those granted in a general archaeological c- text.

To achieve a positive identification, findings have to match with e- dence, particularly when genetic identification is not possible.