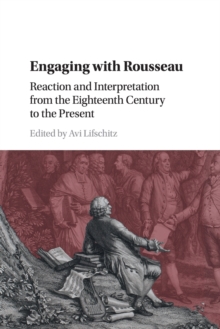 Engaging with Rousseau : Reaction and Interpretation from the Eighteenth Century to the Present Paperback / softback

Jean-Jacques Rousseau has been cast as a champion of Enlightenment and a beacon of Romanticism, a father figure of radical revolutionaries and totalitarian dictators alike, an inventor of the modern notion of the self, and an advocate of stern ancient republicanism.

Engaging with Rousseau treats his writings as an enduring topic of debate, examining the diverse responses they have attracted from the Enlightenment to the present.

Such notions as the general will were, for example, refracted through very different prisms during the struggle for independence in Latin America and in social conflicts in Eastern Europe, or modified by thinkers from Kant to contemporary political theorists.

Beyond Rousseau's ideas, his public image too travelled around the world.

This book examines engagement with Rousseau's works as well as with his self-fashioning; especially in turbulent times, his defiant public identity and his call for regeneration were admired or despised by intellectuals and political agents.