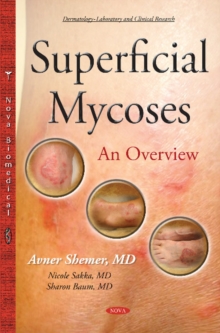 The book is an extensive overview in the topic of superficial mycoses.

The book deliberates on human fungi kingdom, pathogenesis of different superficial mycological diseases, its classical clinical manifestations and the variants clinical forms, with an emphasis on the relevant differential diagnosis, which sometimes might be confused with superficial mycoses.

The book is written in a very practical approach accompanied with images and relevant explanations.

In addition, it gives emphasis on correct diagnosis, focusing on precise and relevant interpretation of mycological laboratory analysis in order to prevent over-diagnosis and misinterpretation of the disease.

The clinical approach -- practically -- is necessary for having correct diagnosis.

The final diagnosis will be supported by using the standard laboratory analysis.

A unique chapter elaborates widely on laboratory analysis, combined with relevant interpretation of the mycological results.

This is due to many different saprophytes fungi which are irrelevant to skin diseases and might be interpreted as relevant, by mistake.

Other laboratories techniques are discussed widely as well.

The different approaches for mycological analysis are elaborated including the interpretation of false positive and false negative results.

Other skin disorders such as psoriasis, atopic dermatitis and/or many other nails disorders which could be accompanied with relevant or irrelevant different fungi are discussed widely accompanied with very impressive clinical pictures and explanations of how and when to suspect combined disorders.

Topical and systemic anti fungi treatment is listed clearly, focusing on the different antifungal mechanisms of each antifungal family.

New different drugs and devices such as lasers, photo dynamic therapy (PDT), and drilling of the nails also are examined.