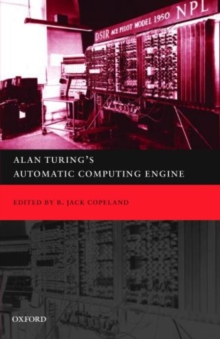 Edited by B. J. Copeland

The mathematical genius Alan Turing, now well known for his crucial wartime role in breaking the ENIGMA code, was the first to conceive of the fundamental principle of the modern computer-the idea of controlling a computing machine's operations by means of a program of coded instructions, stored in the machine's 'memory'.

In 1945 Turing drew up his revolutionary design for an electronic computing machine-his Automatic Computing Engine ('ACE').

A pilot model of theACE ran its first program in 1950 and the production version, the 'DEUCE', went on to become a cornerstone of the fledgling British computer industry.

It contains first hand accounts by Turing and by the pioneers of computing who worked with him.

As well as relating the story of the invention of the computer, the book clearly describes the hardware andsoftware of the ACE-including the very first computer programs.

The book is intended to be accessible to everyone with an interest in computing, and contains numerous diagrams and illustrations as well as original photographs.

The book has an extensive system of hyperlinks to The Turing Archive for the History of Computing, an on-line library of digital facsimiles of typewritten documents by Turing and the other scientists who pioneered the electronic computer.