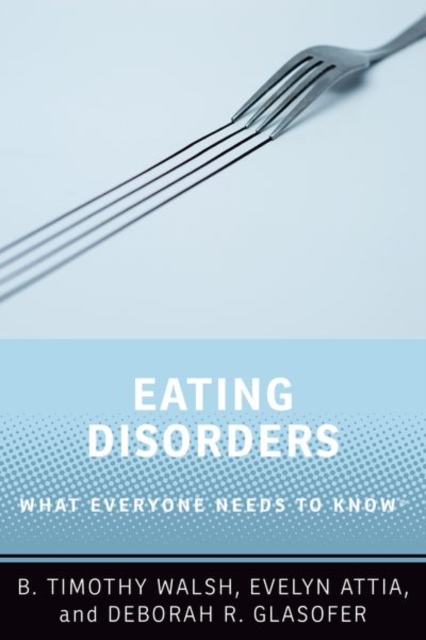 Eating Disorders : What Everyone Needs to Know (R) Paperback / softback

Part of the What Everyone Needs to Know (R) series

They typically appear during adolescence or early adulthood, a time when young people are heading to college or interviewing for a first job.

Many people recover fully from eating disorders, but others become chronically ill, and symptoms can continue into middle age and beyond. Written by leading authorities in eating disorders research and treatment, Eating Disorders: What Everyone Needs to Know answers common questions about eating disorders, including anorexia nervosa, bulimia nervosa, and binge eating disorder, as well as a newly described condition, avoidant/restrictive food intake disorder (ARFID).

Practical yet authoritative, the book defines the eating disorders, explains what we know about them based on the latest science, and describes how treatmentworks.

Importantly, the book dispels common myths about eating disorders, such as the notion that they occur only amongst the affluent, that they affect only girls and women, or that they simply result from environmental factors such as the fashion industry and society's obsession with thinness.

In reality,as the book explains, there is substantial evidence that eating disorders are brain-based illnesses that do not discriminate, and that they have been around for a very long time.

Eating Disorders: What Everyone Needs to Know is essential reading for those seeking authoritative and current information about these often misunderstood illnesses.