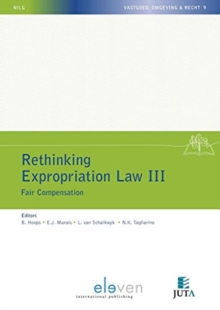 This book is the third of a series in which experts engage critically with the context, criteria and consequences of expropriation.

It addresses the issue of fair compensation for expropriations of tenure rights in land from a comparative and interdisciplinary perspective.

Not all forms of tenure entail that the land user will receive compensation for losing access to the land.

The authors shed light on who qualifies for compensation.

Where a holder of tenure rights is entitled to compensation, the contributions deal with the question of whether other costs, such as income losses, costs of moving, and the loss of one's community, are compensated.

The authors then address the issue of who determines the value of the incurred losses.