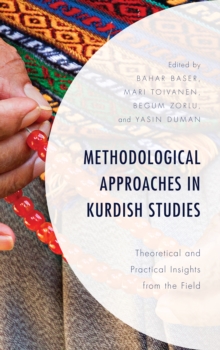 Methodological Approaches in Kurdish Studies : Theoretical and Practical Insights from the Field Hardback

Part of the Kurdish Societies, Politics, and International Relations series

This edited volume presents thirteen contributions that reflect upon the practical, ethical, theoretical and methodological challenges that researchers face when conducting fieldwork in settings that are characterized with deteriorating security situations, increasing state control and conflicting inter-ethnic relations.

More precisely, they shed light to the intricacies of conducting fieldwork on highly politicized and sensitive topics in the region of Kurdistan in Iraq, Syria and Turkey as well as among Kurdish diaspora members in Europe. This volume is multidisciplinary in its focus and approach.

It includes contributions from scholars from various disciplinary backgrounds, ranging from sociology and political science to social psychology and anthropology.

The complexity of security situations, and the atmospheres of distrust and suspicion have led the contributors to be creative and to adapt their research methods in ways that at times transcend disciplinary boundaries and conventions.

Relatedly, the contributions also open the often-considered Pandora's box of discussing the failures in what is often a "messy" research field, and how to adopt one's methods to rapidly changing political circumstances.

This necessitates greater reflexivity in existing power relations of the surrounding context and how those affect not only the interaction situations between the researcher and the participants, but also raise questions for the overall research process, concerning namely social justice, representation and knowledge production.

The contributions unravel this by unpacking positionalities beyond ethnicities, discussing how gendered and other positionalities are constructed in fieldwork interactions and by illustrating how the surrounding structures of power and dominance are present in every-day fieldwork.

What differentiates this book from the existing literature is that it is the first academic endeavor that solely focuses on methodological reflections aimed to the field of Kurdish Studies.

It offers a comprehensive and multidisciplinary account of scholars' fieldwork experiences in the Kurdish regions and as such, it is also of value to scholars conducting or about to conduct fieldwork in conflict regions elsewhere.