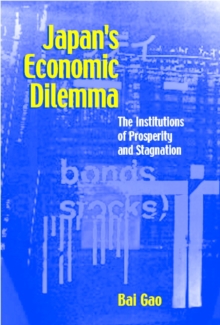 The Japanese economy, after decades of seemingly unsurpassable competitiveness, experienced a major crisis in the 1990s.

Observers of Japan are faced with a challenging question: How can one explain Japan's reversal from stunning prosperity to dismal stagnation?

Bai Gao, in this illuminating, comprehensive analysis of Japan's economic story goes beyond other analyses to demonstrate how the same economic institutions could produce both stunning economic success and the slump of the 1990s.

By comparing the factors that sustained miracle growth in Japan in the 1960s and 1970s with the factors that led to the bubble economy of the late 1980s, Gao sheds new light on internal tensions in the Japanese economic system and how, finally, they 'burst the bubble' in the 1990s.

Those who have been following the lively debate over 'What Became of the Japanese Miracle?' will be rewarded by Gao's richly detailed, historically informed, and multilayered contribution.