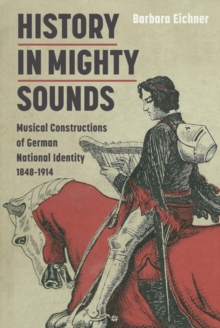 Music played a central role in the self-conception of middle-class Germans between the March Revolution of 1848 and the First World War.

Although German music was widely held to be 'universal' and thus apolitical, it participated - like the other arts - in the historicist project of shaping the nation's future by calling on the national heritage.

Compositions based on - often heavily mythologised - historical events and heroes, such as the Battle of the Teutoburg Forest or the medieval Emperor Barbarossa, invited individual as well as collective identification and brought alive a past that compared favourably with contemporary conditions. History in Mighty Sounds maps out a varied picture of these 'invented traditions' and the manifold ideas of 'Germanness' to which they gave rise, exemplified through works by familiar composers like Max Bruch or Carl Reinecke as well as their nowadays little-known contemporaries.

The whole gamut of musical genres, ranging from pre- and post-Wagnerian opera to popular choruses to symphonic poems, contributes to a novel view of the many ways in which national identities were constructed, shaped and celebrated in and through music.

How did artists adapt historical or literary sources to their purpose, how did they negotiate the precarious balance of aesthetic autonomy and political relevance, and how did notions of gender, landscape and religion influence artistic choices?

All musical works are placed within their broader historical and biographical contexts, with frequent nods to other arts and popular culture.

History in Mighty Sounds will be indispensable reading for anyone interested in nineteenth-century German music, history and nationalism. Barbara Eichner is Senior Lecturer in Musicology at Oxford Brookes University.