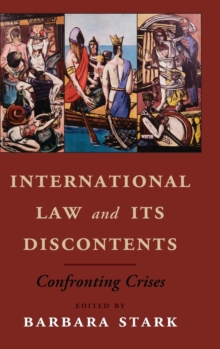 In Civilization and its Discontents, Sigmund Freud argued that civilization itself is the major source of human unhappiness, inhibiting instincts and generating guilt.

In Globalization and its Discontents, Joseph Stiglitz shows how the 'economic architecture' that produced globalization has also driven the backlash against it.

Their shared objective is to expose international law's complicity in the ongoing economic and financial global crises and to assess its capacity - and its will - to constructively address them.

Some, like Freud, view that which holds us together as an inevitable source of discontent.

Others, like Stiglitz, draw on the energy of the backlash.

How have these crises affected particular groups, sovereign states, and international law itself?

How have they responded? When does crisis serve as a catalyst, and for what?