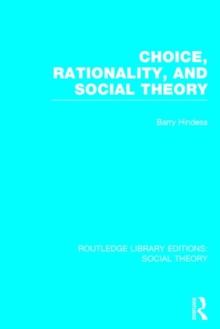 Rational choice analysis maintains that social life is principally to be explained as the outcome of rational choices on the part of individual actors.

Adherents of this view include not only philosophers, political scientists and sociologists, but also prominent politicians in Western governments - notably of the United Kingdom and the United States.

Rational choice analysis is said to be rigorous, capable of great technical sophistication, and able to generate powerful explanations on the basis of a few, relatively simple theoretical assumptions. Barry Hindess argues that the theory is seriously deficient, first, because there are important actors in the modern world other than human individuals, and second, because it says nothing about those processes of deliberation that play an important part in actors' decisions.

The use of highly questionable assumptions about actors and their rationality has the effect of closing off important areas of intellectual inquiry and ignoring the reality of certain forms of thought and the social conditions on which they depend.

These points are established through detailed examination of the concepts of the actor and of rationality - providing an overall argument that constitutes a serious challenge to any adherent of rational choice analysis.