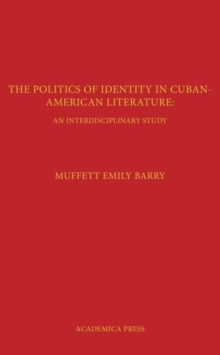 The Politics of Identity in Cuban-American Literature : An Interdisciplinary Study Hardback

Through the prism of literary analysis and cultural studies, The Politics of Identity in Cuban-American Literature is an original examination of the Cuban-American community's diasporic and identitive genealogy from the perspective of their Cuban and American nationalisms.

It engages critically through fictional and non-fictional texts, the politics of writing, language issues that emerge in a bilingual context with the concomitant tensions between preservation and hybridity, the elaboration of myths in group identity formation, and the representation of gender and sexuality as contributors to the overall shaping of their identity.

All these elements are woven into a gripping narrative addressing their contribution to American society and the human dilemmas underpinning the group's exiled identity.

Cuban-Americans, as one of the most unique and important minority ethnic groups in the United States, rose to prominence following the Cuban Revolution of 1959 when the Cold War was at its zenith.

This study traces the acculturative processes and their resistance to citizenship over the several decades following their initial expatriation from Cuba.

Within the context of our present postmodern reality, hybridization is explored through an interdisciplinary approach, thereby refuting traditionally held views of essentialist notions of identity.

The book addresses those wishing to gain an understanding of contemporary conceptual realities.

Though specific to literary criticism and cultural studies it is a cross-over into the area of knowledge, bridging scholasticism with current topical appeals and influences.