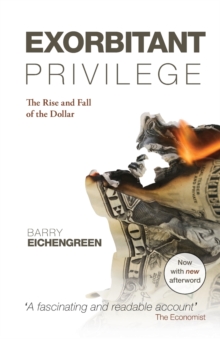 Exorbitant Privilege : The Rise and Fall of the Dollar Paperback / softback

by Barry (Professor of Political Science and Economics, University of California, Berkeley Eichengreen

For more than half a century, the dollar has been not just America's currency but the world's.

It is used globally by importers, exporters, investors, governments and central banks alike.

This singular role of the dollar is a source of strength for the United States.

It is, as a critic of U.S. policies once put it, America's "exorbitant privilege." But now, with U.S. budget deficits extending as far as the eye can see, holding dollars is viewed as a losingproposition.

Some say that the dollar may soon cease to be the world's standard currency, which would depress U.S. living standards and weaken the country's international influence.

In Exorbitant Privilege, one of our foremost economists, Barry Eichengreen, traces the rise of the dollar to international prominence.

He shows how the greenback dominated internationally in the second half of the 20th century for the same reasons that the United States dominated the global economy.

But now, with the rise of China, India, Brazil and other emerging economies, America no longer towers over the global economy.

It follows, Eichengreen argues, that the dollar will not be asdominant.

But this does not mean that coming changes need be sudden and dire DL or that the dollar is doomed to lose its international status.

Challenging the presumption that there is room for only one true global currency, Eichengreen shows that several currencies have regularly shared this role.

What wastrue in the distant past will be true, once again, in the not-too-distant future.

The dollar will lose its international currency status, Eichengreen warns, only if the United States repeats the mistakes that led to the financial crisis and only if it fails to put its fiscal and financial house in order.

Incisive, challenging and iconoclastic, Exorbitant Privilege, is a fascinating analysis of the changes that lie ahead.

It is a challenge, equally, to those who warn that the dollar is doomed and to those who regard its continuing dominance as inevitable.