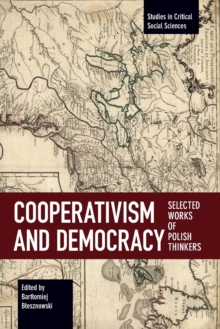 Cooperativism and Democracy, edited by Bartlomiej Blesznowski is not purely a scientific book, but rather a guide which shows how scholars and activists wrote about the community, social participation and politics in Poland in the early 20th century.

The book contains a selection of texts in socio-political thought, led by the work of one of the most important Polish thinkers - Edward Abramowski, socialist, philosopher and psychologist.