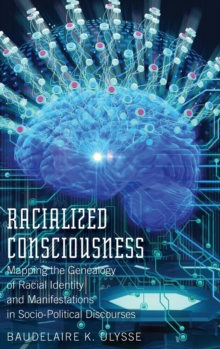 Racialized Consciousness discusses how race, as an invention, has had profound consequences on the economic, political, and social conditions of humans across the world, particularly in the United States.

Today, it continues to manifest in those conditions while shaping in no uncertain terms the way Americans view and interact with each other.

Racialized Consciousness aims to supplement the extant body of literature by drawing the readers' attention to the salient factors that compel them to embrace, more often than not, race as their primary purveyor of identity.

Each chapter of Racialized Consciousness unfolds with a diachronic juxtaposition of racially motivated events, political developments, and historical and legal documents in symbiotically dialectical dialogues.

Critical race theories both mediate and assess the extent to which their racialized consciousness has been liberated or deepened, either symbolically or materially.

Critical race theories, as informed by the social sciences, legal studies, and social psychology, serve both as a bifocal lens to view and a dialectic interface to examine issues such as racism, xenophobia, anti-Semitism, white supremacy, white nationalism, black nationalism, Chicanos, discrimination, prejudice, slavery, mass incarceration, racial injustice, immigration, and Jim Crow; and concerns such as affirmative action, meritocracy, colorblindness, and micro-aggressions; and legacies of court cases such as Brown v.

Students, professors, researchers, and librarians alike will want to read Racialized Consciousness and keep it handy, as they look back into one of most racially charged elections in 2016 and into the future where race, racial identities, and racial politics could potentially become more ubiquitous, complicated, and consequential.