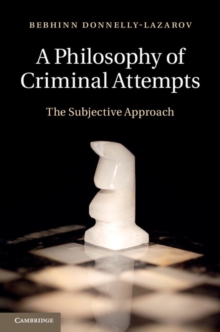 A Philosophy of Criminal Attempts Hardback

An investigation of criminal attempts unearths some of the most fundamental, intriguing and perplexing questions about criminal law and its place in human action.

When does attempting begin? What is the relationship between attempting and intending?

Do we always attempt the possible and, if so, possible to whom?

Is my attempt fixed by me or can another perspective reveal what it is?

Bebhinn Donnelly-Lazarov's answers to these questions will interest criminal law theorists, philosophers and lawyers or law reformers, who encounter the mixed practical and philosophical phenomenon of attempting.

From the conclusions reached, Part II proposes a specific theory of criminal attempts.