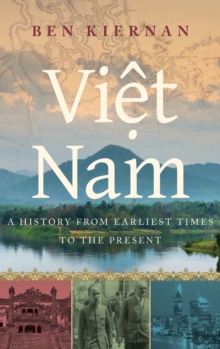 Viet Nam : A History from Earliest Times to the Present Hardback

This book narrates the history of the different peoples who have lived in the three major regions of Viet Nam over the past 3,000 years.

It brings to life their relationships with these regions' landscapes, water resources, and climatic conditions, their changing cultures and religious traditions, and their interactions with their neighbors in China and Southeast Asia.

Key themes include the dramatic impact of changing weather patterns from ancient to medieval andmodern times, the central importance of riverine and maritime communications, ecological and economic transformations, and linguistic and literary changes.

The country's long experience of regional diversity, multi-ethnic populations, and a multi-religious heritage that ranges from local spirit cultsto the influences of Buddhism, Confucianism and Catholicism, makes for a vividly pluralistic narrative.

The arcs of Vietnamese history include the rise and fall of different political formations, from chiefdoms to Chinese provinces, from independent kingdoms to divided regions, civil wars, French colonies, and modern republics.

In the twentieth century anticolonial nationalism, the worldwide depression, Japanese occupation, a French attempt at reconquest, the traumatic American-Vietnamese war, and the 1975 communist victory all set the scene for the making of contemporary Viet Nam.

Rapid economicgrowth in recent decades has transformed this one-party state into a global trading nation.

Yet its rich history still casts a long shadow. Along with other members of the Association of Southeast Asian Nations, Viet Nam is now involved in a tense territorial standoff in the South China Sea, as arival of China and a "partner" of the United States.