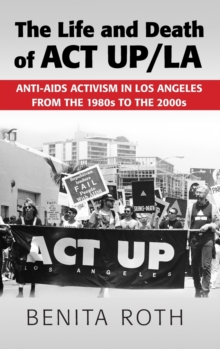 The Life and Death of ACT UP/LA : Anti-AIDS Activism in Los Angeles from the 1980s to the 2000s Hardback

The Life and Death of ACT UP/LA explores the history of the AIDS Coalition to Unleash Power, Los Angeles, part of the militant anti-AIDS movement of the 1980s and 1990s.

The book shows how appealing the direct action anti-AIDS activism was for people across the United States; as well as arguing the need to understand how the politics of place affect organizing, and how the particular features of the Los Angeles cityscape shaped possibilities for activists.

A feminist lens is used, seeing social inequalities as mutually reinforcing and interdependent, to examine the interaction of activists and the outcomes of their actions.

Their struggle against AIDS and homophobia, and to have a voice in their healthcare, presaged the progressive, multi-issue, anti-corporate, confrontational organizing of the late twentieth century, and deserves to be part of that history.