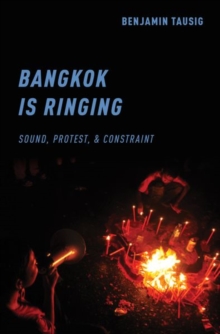 Bangkok Is Ringing is an on-the-ground sound studies analysis of the political protests that transformed Thailand in 2010-11.

Bringing the reader through sixteen distinct "sonic niches" where dissidents used media to broadcast to both local and diffuse audiences, the book mus18ethes these mass protests in a way that few movements have ever been catalogued.

The Red Shirt and Yellow Shirt protests that shook Thailand took place just before other internationalpolitical movements, including the Arab Spring and Occupy Wall Street.

Bangkok Is Ringing analyzes the Thai protests in comparison with these, seeking to understand the logic not only of political change in Thailand, but across the globe. The book is attuned to sound in a great variety of forms.

Author Benjamin Tausig traces the history and use in protest of specific media forms, including community radio, megaphones, CDs, and live concerts.

The research took place over the course of sixteen months, and the author worked closely with musicians, concert promoters, activists, and rank-and-file protesters.

The result is a detailed and sensitive ethnography that argues for an understanding of sound and political movements in tandem. In particular, it emphasizes the necessity of thinking through constraint as a fundamental condition of both political movements and the sound that these movements produce.

In order to produce political transformations, Bangkok Is Ringing argues, dissidents must be sensitive to the ways that theirsounding is constrained and channeled.