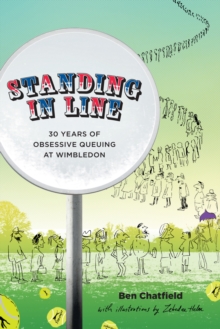 Standing in Line : A Memoir: 30 Years of Obsessive Queuing at Wimbledon Hardback

Standing in Line is a humorous memoir, based on a variety of experiences in The Queue, one of sport's most fascinating traditions.

Told through the eyes of a ten-year-old boy becoming a 39-year-old man, it is a love letter both to Wimbledon and to the wonder of British summertime.

Watching the Championships is a national pastime, and this book is full of the ups and downs out on court, as well as the memorable pop-cultural moments off it.

It is set against the desperate wait for a British Gentlemen's champion, viewed against the global reality show Wimbledon has become - transcending sport and class, yet still embracing tradition.

Illustrated with drawings from renowned artist and author Zebedee Helm, the book observes both the changing world around us and the behaviour of the half-million fans who cram themselves into this leafy corner of London for two weeks every year.

Standing in Line is a joyful, gently nostalgic read for anyone who has found themselves gazing for hours on end at coverage of Wimbledon.