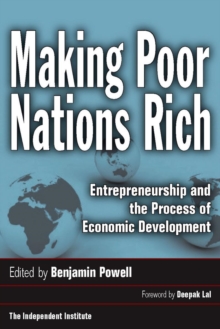 Why do some nations become rich while others remain poor?

Traditional mainstream economic growth theory has done little to answer this question-during most of the twentieth century the theory focused on models that assumed growth was a simple function of labor, capital, and technology.

Through a collection of case studies from Asia and Africa to Latin America and Europe, Making Poor Nations Rich argues for examining the critical role entrepreneurs and the institutional environment of private property rights and economic freedom play in economic development.

Making Poor Nations Rich begins by explaining how entrepreneurs create economic growth and why some institutional environments encourage more productive entrepreneurship than others.

The volume then addresses countries and regions that have failed to develop because of barriers to entrepreneurship.

Finally, the authors turn to countries that have developed by reforming their institutional environment to protect private property rights and grant greater levels of economic freedom. The overall lesson from this volume is clear: pro-market reforms are essential to promoting the productive entrepreneurship that leads to economic growth.

In countries where this institutional environment is lacking, sustained economic development will remain illusive.