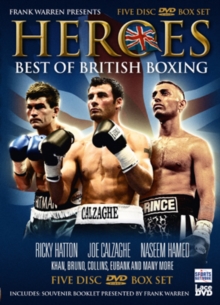 Promoter Frank Warren presents this collection of some of British boxing's greatest fighters.

Along with the epic battles of current world champion Joe Calzaghe, there's footage from the career of Ricky 'The Hitman' Hatton, and the highlights from the best bouts of the ever-flamboyant Prince Naseem.

There's also a look back at some of the best action from legends such as Nigel Benn, Frank Bruno and Steve Collins.