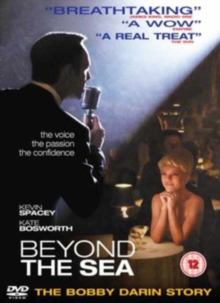 Beyond the Sea DVD

Musical drama based on the life and career of Bobby Darin.

After a string of hits as a rock & roll singer, Bobby Darin (Kevin Spacey) takes a gamble, and with the help of manager Steve Blauner (John Goodman) he reinvents himself as a supper-club vocalist in the manner of Frank Sinatra.

After topping the charts with his swinging version of 'Mack the Knife' he sets his sights on acting and on the set of his first movie, he meets Sandra Dee (Kate Bosworth), who he eventually weds.

But after a string of successful movies for Dee and hit records and an Oscar nomination for Darin, the shifting tastes of the 1960s throw their careers off-track.