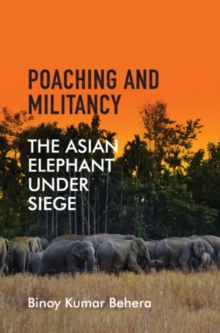 Poaching and Militancy : The Asian Elephant under Siege Hardback

The Asian elephant is an endangered species due to its relentless poaching mainly for ivory.

However, unlike the African elephant whose both males and females are tusk bearers, in Asian elephants only males bear tusk.

This has resulted in their selective killing and has not only led to an alarming fall in their number but impacted the sex-ratio.

This book critically examines this problem and addresses the issue of human-elephant conflict.

It studies the four elephant zones of the country with specific focus on Odisha, which is home to a large population of elephants in the central Indian zone.

It also ponders on the possibility of the existence of a well-developed network supporting organized poaching and armed militancy, which applies to the central African countries as well.