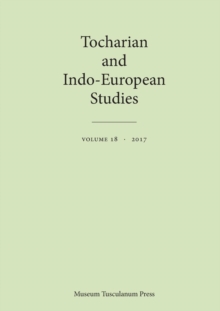 Tocharian and Indo-European Studies (TIES) publishes cen-tral topics on the two closely related languages Tocharian A and B, attested in Cen-tral Asian Buddhist manuscripts dating from the second half of the first millennium AD.

It focuses on philological and linguistic aspects of Tocharian and explores its relation to the other Indo-European languages.