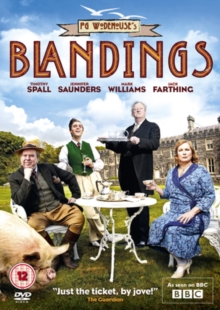 Complete first series of the British sitcom based on the stories by P.G.

Set in 1929, the series follows Clarence Threepwood (Spall), the Ninth Earl of Emsworth and head of Blandings Castle, who would like nothing more than to be left alone, along with his cherished pet pig The Empress.

Unfortunately, in such a chaotic household his wish rarely comes true and he is forced to face up to familial responsibilities by his formidable sister Connie (Saunders).

The episodes are: 'Pig-hoo-o-o-o-ey',' The Go-getter', 'Company for Gertrude', 'The Crime Wave at Blandings', 'Lord Emsworth and the Girlfriend' and 'Problems With Drink'.