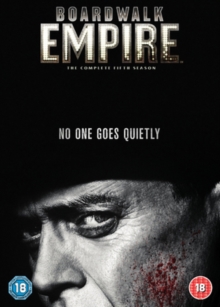 All eight episodes from the fifth and final season of the Golden Globe-winning HBO period drama set during the 1920s and '30s Prohibition era.

In this series, set seven years after the events of the previous season, Nucky is trying to strike a deal with the Bacardi Rum Company in Cuba for when Prohibition is repealed, Al Capone (Stephen Graham) continues to capitalise on his reign as a crime boss in Chicago and Luciano (Vincent Piazza) enters into a pact with several other Italian-run criminal organisations.

The episodes are: 'Golden Days for Boys and Girls', 'The Good Listener', 'What Jesus Said', 'Cuanto', 'King of Norway', 'Devil You Know', 'Friendless Child' and 'Eldorado'.