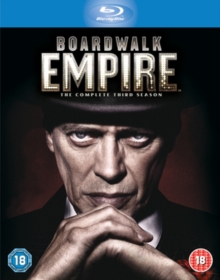 All 12 episodes from the third season of the Golden Globe-winning HBO period drama set during the 1920s Prohibition era.

In this series, crime boss Gyp Rosetti (Bobby Cannavale) causes problems for Nucky's business, Eli (Shea Whigham) has difficulty adjusting to his new life after he is released from prison and Gillian (Gretchen Mol) tries to deal with a devastating loss.