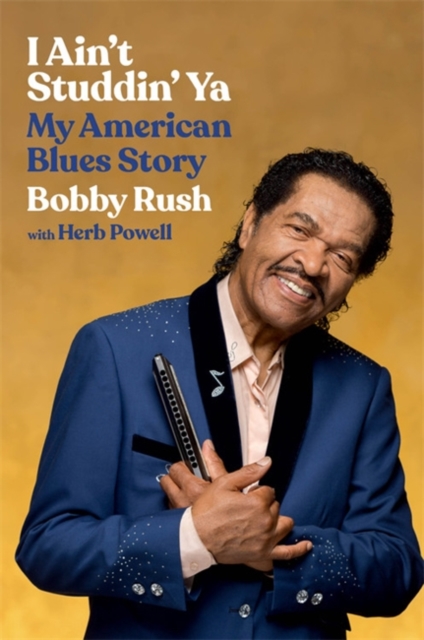 I Ain't Studdin' Ya : My American Blues Story Hardback

Born Emmet Ellis, Jr. in Homer, Louisiana, he adopted the stage name Bobby Rush out of respect for his father, a pastor.

As a teenager, Rush acquired his first real guitar and started playing in juke joints in Little Rock, Arkansas, donning a fake mustache to trick club owners into thinking he was old enough to gain entry into their establishments.

During the mid-1950s, Rush relocated to Chicago to pursue his musical career.

It was there that he started to work with Earl Hooker, Luther Allison, and Freddie King, and sat in with many of his musical heroes, such as Howlin' Wolf, Muddy Waters, Jimmy Reed and Little Walter.

Rush eventually began leading his own band in the 1960s, crafting his own distinct style of funky blues, and recording a succession of singles for various labels.

It wasn't until the early 1970s that Rush finally scored a hit with "Chicken Heads." More recordings followed, including an album which went on to be listed in the Top 10 blues albums of the 1970s by Rolling Stone and a handful of regional jukebox favorites including "Sue" and "I Ain't Studdin' Ya."And Rush's career shows no signs of slowing down now.

The man once beloved for performing in local jukejoints is now headlining major music/blues festivals, clubs, and theaters across the U.S. and as far as Japan and Australia. At age 86, he is still on the road for over 200 days a year.

His lifelong hectic tour schedule, dating back to the '50s, earned him the affectionate title "King of the Chitlin' Circuit," from Rolling Stone.

In 2007, he earned the distinction of being the first blues artist to play at the Great Wall of China.

His renowned stage act features his famed shake dancers, who personify his funky blues and the ribald humor that he has cultivated during the course of his storied career.

He was featured in Martin Scorcese's The Blues docuseries on PBS, a documentary film called Take Me to the River, performed with Dan Aykroyd on The Tonight Show Starring Jimmy Fallon, and most recently had a cameo in the Golden Globe nominated Netflix film, Dolemite Is My Name, starring Eddie Murphy.

He was recently given the highest Blues Music Award honor of B.B.

King Entertainer of the Year. His songs have also been featured in TV shows and films including HBO's Ballers and major motion pictures like Black Snake Moan, starring Samuel L.

Jackson. Considered by many to be the greatest bluesman currently performing, this book will give readers unparalleled access into the man, the myth, the legend: Bobby Rush.