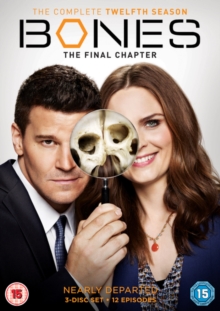 All 12 episodes from the twelfth and final season of the US forensic investigation drama starring Emily Deschanel and David Boreanaz.

In this season, Bones (Deschanel) is kidnapped by her former assistant Zack (Eric Millegan), the team investigate the mysterious death of a scientist who builds robots and Booth (Boreanaz) looks into his past when dead bodies start appearing that seem to be connected to his old army unit.

The episodes are: 'The Hope in the Horror', 'The Brain in the Bot', 'The New Tricks in the Old Dogs', 'The Price for the Past', 'The Tutor in the Tussle', 'The Flaw in the Saw', 'The Scare in the Score', 'The Grief and the Girl', 'The Steel in the Wheels', 'The Radioactive Panthers in the Party', 'The Day in the Life' and 'The End in the End'.