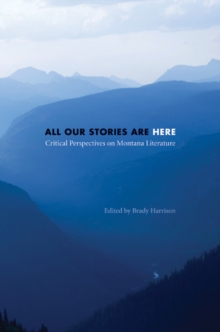 All Our Stories Are Here : Critical Perspectives on Montana Literature Hardback

This wide-ranging collection of essays addresses a diverse and expanded vision of Montana literature, offering new readings of both canonical and overlooked texts.

Although a handful of Montana writers such as Richard Hugo, A.

B. Guthrie Jr., D'Arcy McNickle, and James Welch have received considerable critical attention, sizable gaps remain in the analysis of the state's ever-growing and ever-evolving canon.

The twelve essays in All Our Stories Are Here not only build on the exemplary, foundational work of other writers but also open further interpretative and critical conversations. Expanding on the critical paradigms of the past and bringing to bear some of the latest developments in literary and cultural studies, the contributors engage issues such as queer ambivalence in Montana writing, representations of the state in popular romances, and the importance of the University of Montana's creative writing program in fostering the state's literary corpus.

The contributors also explore the work of writers who have not yet received their critical due, take new looks at old friends, and offer some of the first explorations of recent works by well-established artists.

All Our Stories Are Here conveys a sense of continuity in the field of Western literary criticism, while at the same time challenging conventional approaches to regional literature.