The Wardle Family and its Circle: Textile Production in the Arts and Crafts Era Hardback

This book is a richly illustrated history of the Wardle family of Leek, Staffordshire, which rose to prominence in fine textile production in the second half of the nineteenth century.

At its core is an object-centred exploration revealing how an entrepreneurial family responded to complex international factors.

Followers of the Arts and Crafts Movement and Gothic Revivalism, as well as Art Needlework and Aestheticism, benefited from the family enterprises that flourished despite rapid industrialisation. The Wardle family's rich legacy is played out against the backdrop of the Anglo-Indian silk trade.

His work attracted William Morris, Walter Crane and A.

L. Liberty, among others, and their designs, printed by Wardle, were internationally applauded.

Elizabeth Wardle, embroiderer, worked with many major architects such as R.

N. Shaw, G. G. Scott Jnr and J. D. Sedding. Lavishly illustrated, this book will be of interest to those interested in textile and fashion history and the history of the Arts and Crafts movement, as well as the relationship between the British Empire and the Indian subcontinent. BRENDA M. KING is a textile historian and holds the Chair of the Textile Society.

She is also a freelance lecturer in the History of Design and Museum and Heritage Studies and the author of Silk and Empire (2005 and 2009) and Dye, Print, Stitch: Textiles by Thomas and Elizabeth Wardle (2009). 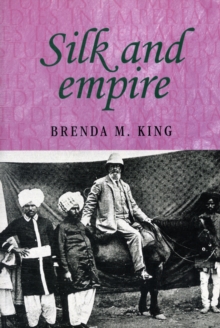