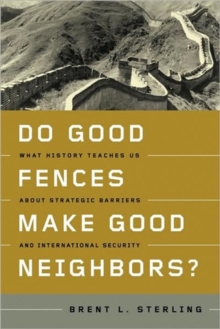 A number of nations, conspicuously Israel and the United States, have been increasingly attracted to the use of strategic barriers to promote national defense.

In "Do Good Fences Make Good Neighbours?", defense analyst Brent Sterling examines the historical use of strategic defences such as walls or fortifications to evaluate their effectiveness and consider their implications for modern security.

Although many of these barriers were effective in the short term, they also affected the states that created them in terms of cost, strategic outlook, military readiness, and relations with neighbours.

Advocates and critics of strategic defences often bolster their arguments by selectively distorting history. Sterling emphasizes the need for an impartial examination of what past experience can teach us.

His study yields nuanced lessons about strategic barriers and international security and yields findings that are relevant for security scholars and compelling to general readers.