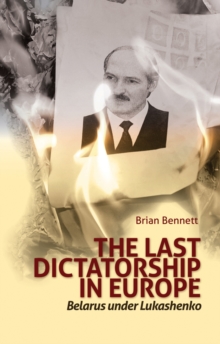 The Last Dictatorship in Europe : Belarus Under Lukashenko Hardback

Belarus is an isolated country dominated by one man.

Few tourists go there despite its fascinating, cultured past and beautiful countryside.

Belarussians are friendly and hospitable yet they rarely have the chance to speak their minds and are deprived of access to unbiased information.

They have been removed from the flow of European history by a tyrannical regime described by Condoleezza Rice, the former US Secretary of State, as 'the last dictatorship in Europe'.

The people of Belarus were not ready for independence in 1991 and were misled into believing that the young, unsophisticated Alexander Lukashenko would lead them into a bright future.

Instead he foisted upon them a dictatorship little different from what they had known before.

Bennett's book tracks the history of Belarus from the collapse of the Soviet Union to the eventual establishment of dictatorship in 2006.

It takes the reader through the excitement and mistakes of the first presidential election in 1994, undemocratic referenda and elections, suspicious disappearances of critics of the regime and the suppression of opposition.

It ends with a close look at the enigmatic Alexander Lukashenko and hazards a guess as to how his regime will end.

Belarus deserves to be better known; this book pulls back the curtain