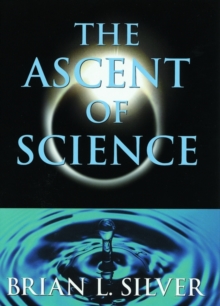 The Ascent of Science Paperback / softback

'This book is a report of the scientific campaign up to now.

It is not a history of science but rather an account of the major battles, the frequently eccentric generals and the ways in which science has deeply influenced man's picture of the world and of himself.

It is not a final summing-up. We know that we are far from a real understanding of nature.

We press on. Michelangelo's divine discontent gives us no rest. And although the history of science may be a traillittered with broken theories and discarded concepts, science is also a triumph of reason, luck, and above all imagination.

There are few more successful, exciting, or strange journeys.' From the author's preface In The Ascent of Science, Brian Silver provides a sweeping and dynamic overview of the whole of Western science, from the Renaissance to the present.

In it, he translates the most profoundly important, and often impenetrably obscure, scientific developments into a vernacular that is not only accessible and illuminating but highly enjoyable as well.