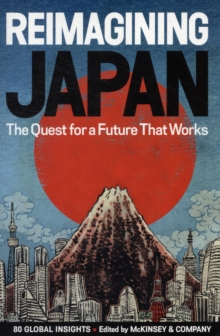 REIMAGINING JAPAN : The Quest for a Future That Works Hardback

In the aftermath of the earthquake, tsunami and nuclear crisis of March 2011, Japan has become a bigger part of the world's consciousness than it has been for years.

But Japan is also grappling with other problems that, over the long run, pose a much greater challenge to its national well-being than the devastation in Tohuku.

How can the country compete with a rising China? Cope with a fast-aging society? Deal with its enormous debt? Rediscover its entrepreneurial verve? Regain its position as a leader in technology and innovation?

In essays brimming wth insight, affection and occasional humour, the authors offer their assessments of Japan's past, present and - most important - future.

What sets Reimagining Japan apart is the breadth and diversity of its contributors.

They range from Fortune 500 CEO's to acclaimed writers (including three Pulitzer Prize winners) to a star videogame creator, a football coach, a school principal and a manga artist.

There has not been such a comprehensive book about Japan in the past generation - and perhaps ever.