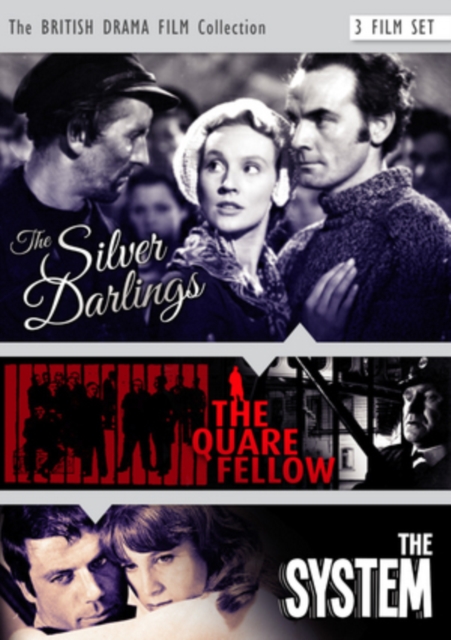 Collection of three classic British dramas. 'The Silver Darlings' (1947) is set in a Highland fishing community at the turn of the 20th century.

After the Highland Clearances, Catrine (Helen Shingler)'s husband is forced to reluctantly abandon his farm to become a herring fisherman.

When he is called upon to serve in the Royal Navy, Catrine is left to raise their young son Finn (Christopher Capon) alone in north-east Scotland.

She soon falls for charming fisherman Roddie (Clifford Evans) but fears losing both him and Finn to the sea.

In 'The Quare Fellow' (1962) Thomas Crimmin (Patrick McGoohan) is appointed as a warden in an Irish prison.

Despite beginning with the view that he is doing a service to his country by punishing criminals, the attitude of his superior and his encounter with the wife of an inmate lead him to change his perspective and realise that things are not always so black and white.

Finally, 'The System' (1964) is a cynical tale of sexual mores, set in a British seaside town during the 'mod' invasions of the 1960s.

Every year Tinker (Oliver Reed) and the rest of the local youths wait for the influx of summer tourists to descend on their sleepy seaside town.

The arrival sparks their search for the latest sexual conquest to be had, with no strings attached and no love wasted.

That is until Tinker hooks up with Nicola (Jane Merrow), a fashion model from a well-off family, who, playing him at his own game, manages to do the unthinkable - steal Tinker's heart.

Now, as their situations become reversed, it's Tinker who suddenly realises that he's the one being played.