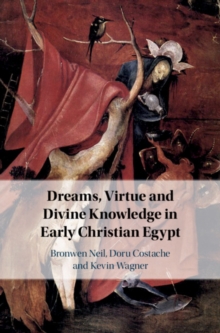 What did dreams mean to Egyptian Christians of the first to the sixth centuries?

Alexandrian philosophers, starting with Philo, Clement and Origen, developed a new approach to dreams that was to have profound effects on the spirituality of the medieval West and Byzantium.

Their approach, founded on the principles of Platonism, was based on the convictions that God could send prophetic dreams and that these could be interpreted by people of sufficient virtue.

In the fourth century, the Alexandrian approach was expanded by Athanasius and Evagrius to include a more holistic psychological understanding of what dreams meant for spiritual progress.

The ideas that God could be known in dreams and that dreams were linked to virtue flourished in the context of Egyptian desert monasticism.

This volume traces that development and its influence on early Egyptian experiences of the divine in dreams.