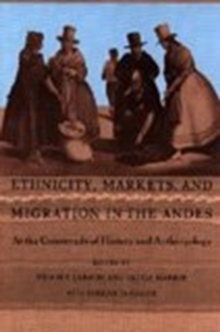 Ethnicity, Markets, and Migration in the Andes : At the Crossroads of History and Anthropology Hardback

Until now, Andean peasants have primarily been thought of by scholars as isolated subsistence farmers, "resistant" to money and to different markets in the region.

Ethnicity, Markets, and Migration in the Andes overturns this widely held assumption and puts in its place a new perspective as it explores the dynamic between Andean cultural, social, and economic practices and the market forces of a colonial and postcolonial mercantile economy.

Bringing together the work of outstanding scholars in Andean history, anthropology, and ethnohistory, these pioneering essays show how, from the very earliest period of Spanish rule, Andean peasants and their rulers embraced the new economic opportunities and challenged or subverted the new structures introduced by the colonial administration.

They also convincingly explain why in the twentieth century the mistaken idea developed that Andean peasants were conservative and unable to participate effectively in different markets, and reveal how closely ethnic inequalities were tied to evolving market relations.

Inviting a critical reconsideration of ethnic, class, and gender issues in the context of rural Andean markets, this book will revise the prevailing view of Andean history and provide a more fully informed picture of the complex mercantile activities of Andean peasants.