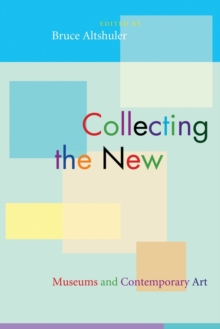 Collecting the New is the first book on the questions and challenges that museums face in acquiring and preserving contemporary art. Because such art has not yet withstood the test of time, it defies the traditional understanding of the art museum as an institution that collects and displays works of long-established aesthetic and historical value.

By acquiring such art, museums gamble on the future.

In addition, new technologies and alternative conceptions of the artwork have created special problems of conservation, while social, political, and aesthetic changes have generated new categories of works to be collected.

First considered are general issues including the acquisition process, and collecting by universal survey museums and museums that focus on modern and contemporary art. Following are groups of essays that address collecting in particular media, including prints and drawings, new (digital) media, and film and video; and national- and ethnic-specific collecting (contemporary art from Asia, Africa, and Latin America, and African-American art).

The closing essay examines the conservation problems created by contemporary works--for example, what is to be done when deterioration is the artist's intent?