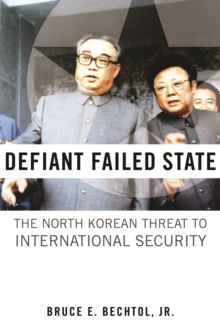 Since the 1990s, the American government has under prioritized the North Korean threat to global security, according to Bruce Bechtol, an associate professor of political science at Angelo State University. Because North Korea appears economically weak and politically unstable, it is therefore often categorized as a state on the brink of collapse, or a failed state.

But Bechtol makes a convincing case that North Korea is more complex and menacing than it how it has often been characterized. Defiant Failed State shows how the North Korean government has adapted to the post-Cold War environment and poses a multifaceted danger to U.S. national security and that of its allies. Bechtol analyzes North Korea's military capabilities, nuclear program, proliferation, and leadership succession to mine the answers to important questions such as, is North Korea a failing or failed state?

Is it capable of surviving indefinitely? Why and how does it present such risk to Asia and the United States and its allies?This book sheds new light on the nature of the North Korean threat and the key foreign policy issues that remain unresolved between the United States and South Korea.

It is essential reading for scholars, policymakers, military strategists, functional and regional specialists, and anyone who is interested in East Asian affairs.