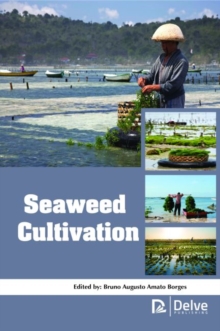 The seaweeds are a large group of marine macroalgae that can be found in several coastal regions around the world.

Though there are about 9200 species of seaweeds, only 221 species are economically important (Mohammed, 2013).

There are three different groups of seaweed-red, brown, and green their characteristic colors and properties.

Seaweed cultivation is a relatively old and extremely important activity for the human being, because of the various properties and utilities that it owns.

Both countries along with the Republic of Korea are the biggest consumers of seaweed in the world, contributed with 80% of global production (Mohammed, 2013).

Worldwide, the most extensive crops are performed in the open sea or estuaries, with little technology involved and in order to help in the income of the fishermen.

However, in this system the biggest concern and effort involved is in management, mainly of the harvest, but also daily by the need of monitoring the situation and existing dynamics in these regions.

Seaweeds have various uses and great commercial importance on the world market.

Among them, we highlight the production of hydrocolloids (agar, carrageenans, and alginate), fertilizers, nutraceuticals, human food, water treatment, bioremediation, biofuels, medicinal uses, for spa and beauty, among others.

The worldwide seaweed industry provides a wide variety of products for direct or indirect human uses that have an estimated total value of US$10 billion per year (Bixler & Porse 2011).

Since the emergence of the seaweed cultivation processes are in constant improvement, mainly related to knowledge, management and improvements within the activity.

Naturally, the demand for seaweed products has generated the need for increased knowledge to resolve main problems in the development of seaweed aquaculture, as for example the selection of suitable environments; engineering of the seashore for farming; protection of crops from pests and physical or biotic impacts; and proper transplantation and harvesting procedures (Buschmann et al., 1995).

Seaweeds are a highly renewable food resource. They can be grown and harvested all year round, in any marine environment.

Production is low impact - seaweeds need no chemicals, fertilizers or pesticides, in addition to require no deforestation.

Seaweed cultivation can still be added in different production systems as bioremediation and in treatment of effluents from industry, in order to contribute to the maintenance of the quality of the environment.

In addition to bring benefits to the environment, the seaweed cultivation has contributed to increase income of the coastal communities that depend on fishing.

Although the cultivation of seaweed being a relatively simple activity with respect to processes, many improvements can be made from the point of view of management and production, so as to make easiest and most effective methods.

Therefore, it is essential to maintain the focus and work on research that seeks the development and evolution of the area.

In addition to being an important economic resource, is fundamental basis for the conservation of marine and coastal ecosystems worldwide.